By utilising Hermes M-Coating technology, DrainsAid were able to undertake the rehabilitation of a deteriorating sea outfall in Scarborough, in a highly sustainable manner. By using materials and techniques that are proven to be non-harmful to the environment and by minimising the impact on the surrounding ecosystem, infrastructure and the general public, we ensured our carbon footprint remained minimal. While overcoming the major challenge of the ever-changing tides and unreliable British weather, we will be able to help maintain the beaches blue flag status which, in turn, will ensure tourism and commercial interests will continue unimpeded.

DrainsAid were tasked with the rehabilitation of the 90m long, 1800mm diameter brick, surface-water outfall off Scalby Mills Road in Scarborough, next to the town’s Sealife centre visitor attraction.

The outfall, which runs from Yorkshire Water’s Wastewater Treatment Works on Scalby Mills Road onto the beach, required repairs to permanently seal the culvert against water in/exfiltration and improve the overall flow. Without this rehabilitation, surface water would have continued to leak onto the beach and contaminate the bathing water. Not only would this have caused damage to the environment, it would have been unsanitary for the public, which potentially, may have had a detrimental effect on the local economy. 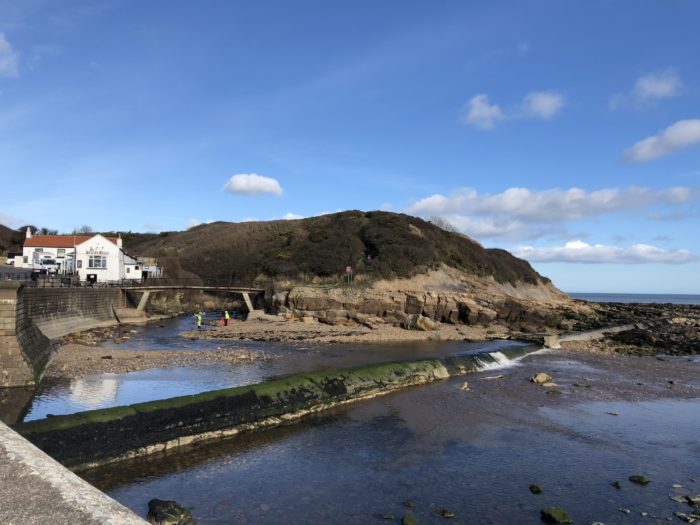 DrainsAid completed thorough site investigations, as well as CCTV surveys of the outfall to determine its existing condition.

Findings showed the outfall had a significant amount of silt deposited in the channel and was suffering from a loss of mortar from the brickwork joints, allowing both infiltration and exfiltration.

Prior to rehabilitation, the outfall would require a significant cleansing and desilting operation, as well as a large number of joint repairs. The inspection also identified that the brickwork was glazed, which would require deglazing prior to renovation.

Originally developed for the rehabilitation of manholes, the M-Coating system can be used in many situations. In this case, ERGELIT mortar was applied by utilising the trolley application, which is specifically designed for horizontal pipelines. CIPP lining methods would have been impractical due to the location and access issues on to the beach. Using the small Hermes M-Coating trolley to coat the pipe’s inner wall eliminated this risk.

This resurging methodology also has a reduced carbon footprint when compared to traditional CIPP methods, such as hot water cure lining. The ERGELIT KBi mortar used for the injection and KS1 for the lining processes are considered environmentally-friendly, as they use only non-toxic chemicals.

As the entry manhole allowed for full access to the outfall, no enabling works were required. Additionally, by using the trenchless technique of spray-lining, DrainsAid was able to work within the pipe’s existing structure, ensuring that as little disruption as possible was caused to the public, local businesses and coastal ecosystem. 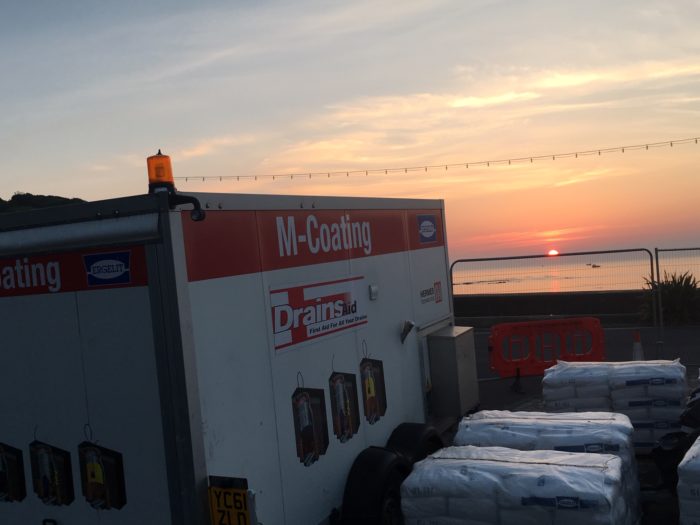 The planning of this particular project was crucial to ensure all works would be completed within the client’s specified time frame and budget constraints.

The ever-changing tides and unpredictable weather would understandably make the task more difficult, even for DrainsAid’s experienced team. All work would have to be completed during low tide periods, giving a working window of only 4-6 hours each day. Weather reports were checked daily, to ensure there was no imminent risk of the outfall flowing whilst works continued.

Before works began, all neighbouring businesses, including Scarborough Council and the Sea Life Centre were notified well in advance. While local shops and residents received letters detailing when works would begin and how long the process would take.

Due to the location of the outfall, the client arranged a road notice to work under two way temporary traffic lights and a roundabout, which would remain in place for 10 working days. In the Sea Life Centre car park, a number of parking bays were closed off by fencing to ensure pedestrians could not gain access into the site, guaranteeing their safety. The Yorkshire Water Wastewater Treatment Works and Sea Life Centre remained accessible at all times.

The project managers ensured all traffic and pedestrian control was set out by NRASWA trained operatives in accordance with all currently approved codes of practice. 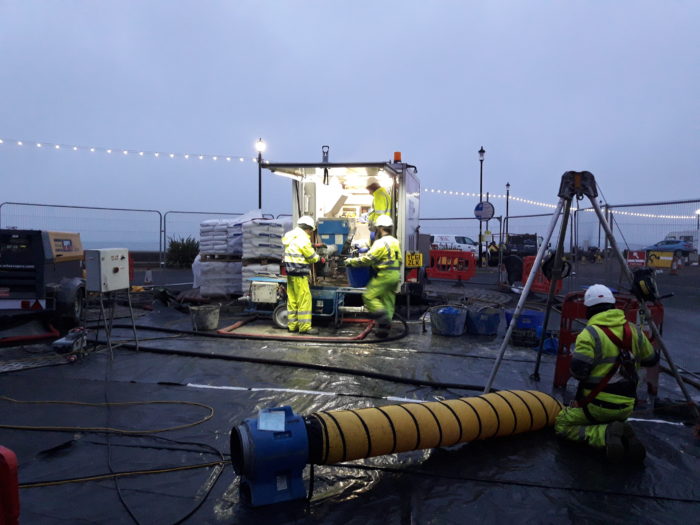 To meet current EN standards all operatives were required to wear full PPE at all times.

DrainsAid’s highly efficient JHL 414 Recycling Jet-Vac Tanker was utilised to clean and de-silt the culvert. The recycler unit was chosen, as oppose to a jet vac combination unit, as it offered a significantly reduced carbon footprint. The water-recycling capability allowed continued cleaning throughout the duration of the shift, without the need to re-fill with water, making this part of the operation time, cost and fuel efficient, as well as reducing the need for fresh water resources. This unit also allowed for more productivity, especially as shift times were limited due to the changing tide.

Larger obstructions, such as rocks and rubble, were removed by hand, whilst a significant amount of grit blasting was required to remove the original pipe glaze, creating a large amount of waste grit that also had to be removed.

Having identified locations of infiltration, using a pneumatic drill the crew created holes in the culvert walls and used a mortar injection process to seal the pipe, preventing future water ingress. This often pushed infiltration further along the pipe, where the process had to be repeated until all infiltration was located and sealed. The spray lining operation could then begin.

After the dry ERGELIT KS1 mortar was fed into the feed hopper, it was mixed with water until it reached the ideal consistency. Drip trays were used during filling operations to contain any spillages.

This was then passed under pressure down a feed hose to the spray lining trolley situated inside the culvert. The lengths of spray lining hose, which were visually checked each day prior to works commencing, could be changed in 30 to 40m lengths. 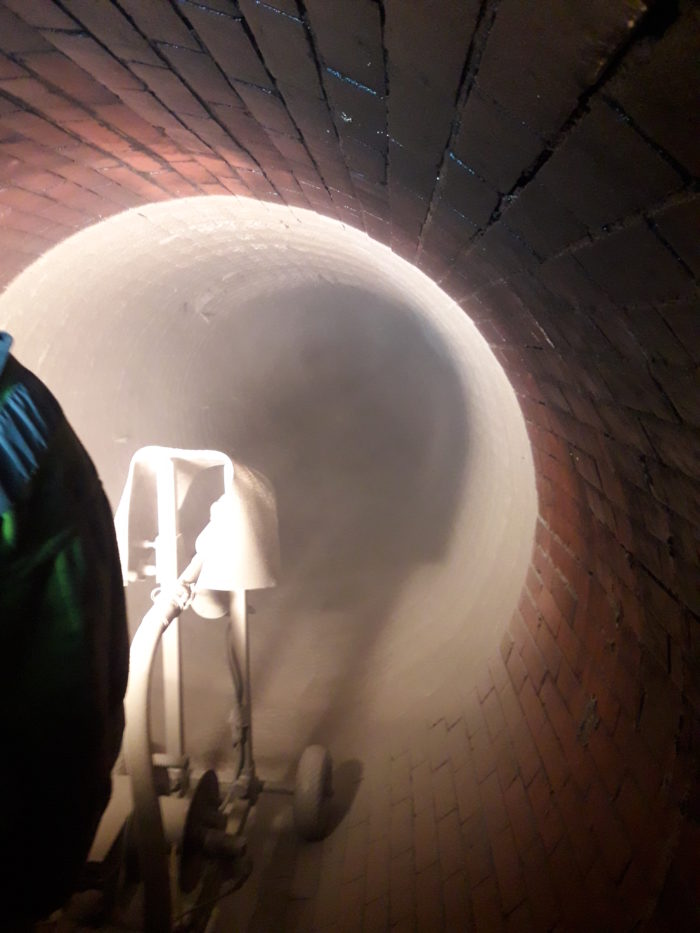 The five person operations team consisted of a top man, who would remain in position at all times during the procedure. He would constantly monitor the surroundings and the gas detector readings to ensure conditions were safe for those in the culvert. Additionally, a two-man safety team were continually present at the downstream manhole in case of emergencies.

A ‘bottom man’ entered the manhole, whilst attached to the winch and safety line. Remaining in position for the duration of the lining traverse, he helped the final three men descend and enter the culvert. Each man entering the manhole required escape breathing apparatus on hand at all times.

The operative’s then pulled the trolley into position and the spray lining was set in motion, continuing until the coating reached the desired 10mm thickness.

A bund is placed at the downstream manhole/outlet to catch any mortar residue, before it can enter the watercourse. This is then removed after each shift and any excess mortar is detached, bagged, and removed from site, before being taken to a licensed waste facility.

Unusually, during their time on site, the crew also played a key role in the rescue efforts of an injured seal. After seeing the wounded animal on the rocks at the beach, the team informed the Sea Life Centre. We then helped to catch the seal, bringing the animal inland to receive medical attention, before releasing it back into its natural habitat. 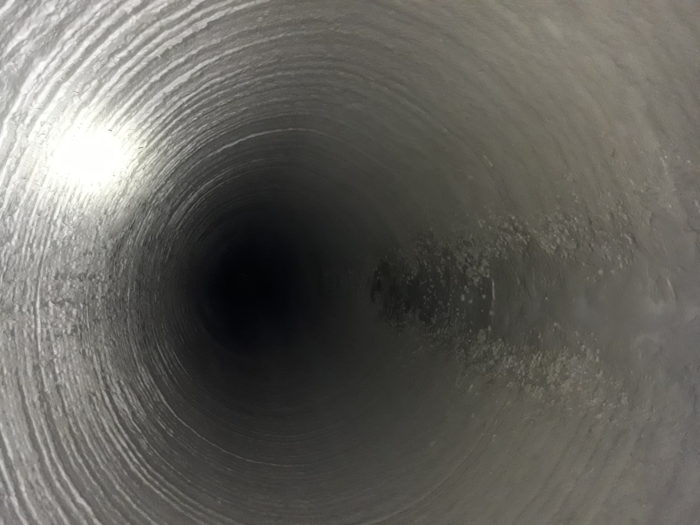 DrainsAid’s relationship with local residents and businesses, as well as staff and guests at the Sea Life Centre, has remained friendly and professional throughout. Having seen first-hand our ability to work efficiently, while opting for environmentally-friendly methods, the Sea Life Centre tasked DrainsAid with further cleansing and desilting works for its indoor tanks and drainage system.

If you require further information about our m-coating services, call us on 08000180123 or use our online contact form. 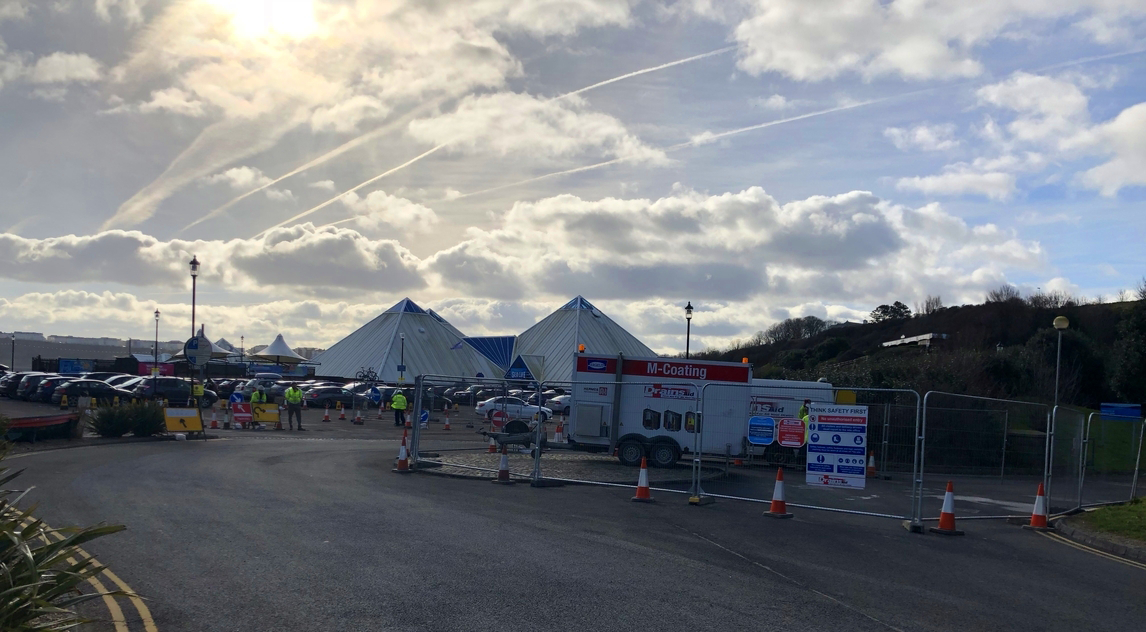