AMCO partnered with the Environment Agency to help resolve the wide spread flooding issues occurring in numerous locations around Oldham, Greater Manchester. The brief indicated this was due to numerous defects in the existing culverts, within the schemes scope. Our client required a variety of drainage repair techniques, all of which we were able to deliver in house.

DrainsAid were tasked with the drainage remedial works on assets at three specific locations.

Certain techniques, such as concrete spray lining, would have been problematic to complete in the winter months due to the unreliable weather. Therefore, we decided to first concentrate on the locations that had easy access and return to the more challenging sites in the summer months.

We began work at Long Clough, Royton in November 2017, cleaning and surveying nearly 600m of culvert. Following these works we were able to provide a robust solution for the repair of the three, damaged sections identified during our investigations.

The proposed solution was to install a UV CIPP (Cured-In-Place-Pipe) liner. This modern trenchless technique was chosen as it offers a considerably lower carbon footprint than that of more traditional methods, as it requires a minimum expenditure of energy. It also significantly reduces any environmental risk of styrene pollution. In addition, UV cured lining can be installed faster than any other method currently available, therefore it was the best solution for use in the busy, highly-trafficked area, keeping disruption to a minimum.

Next came a square, stone-built culvert in Pickhill where DrainsAid completed the installation of a 45m x 600mm x 600mm steam cure CIPP liner. The liner was installed to alleviate long term surface water flooding in the area on behalf of the Environment Agency.

The project involved desilting approximately 90m x 750mm of pipe and box culvert, as well as a holding area in the Duck Pond, which contained about 51 tonnes of silt. DrainsAid’s state of the art JHL 414 Recycling Jet-Vac Tanker was utilised to remove the 51 tonnes of silt. The recycler unit was used on site, rather than a traditional excavator/grab, to utilize its powerful suction and remove silt from the duck pond. The water-recycling capability of this unit allowed us to continue up the culvert, cleansing throughout the duration of the shift without the need to re-fill with water.

This allowed for more productivity per shift and demonstrates the environmental benefits associated with water re-use.

DrainsAid worked alongside RSM Lining Supplies to successfully install the steam cure CIPP liner, which was the equivalent of 764mm in diameter with a lining thickness of 14mm.

The steam cure method was chosen instead of the alternative hot cure method, to negate the possibility of styrene water potentially discharging into the surface water and damaging the environment. It also gave the liner the best chance of adhering to the shape of the existing culvert to improve its structural integrity. The installation took place over a ten hour period, to minimise disruption to locals and to ensure works were completed on programme between the heavy rain showers and winter working conditions. 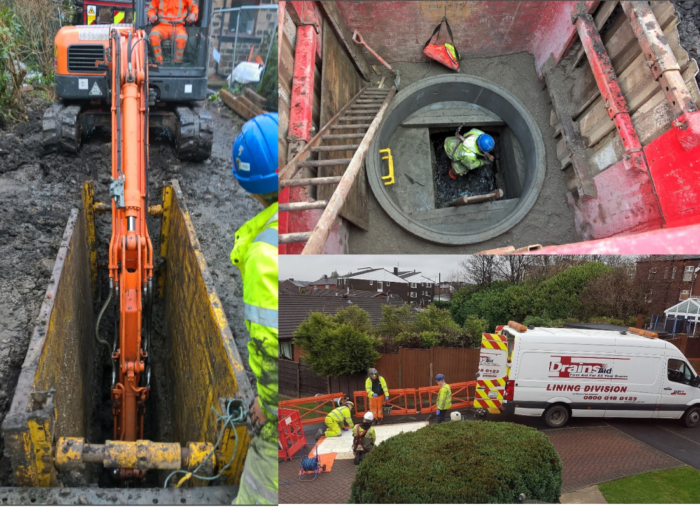 We were tasked with solving the flooding issues on Wellmeadow Lane, Uppermill. After initial investigation we found that a surface water line that originated at one of the road gullies was capped off, and wasn’t piped into the newly installed culvert. Due to this, whenever it rained, local residents gardens became remarkably waterlogged, and wouldn’t drain away.

Our solution was to undertake a 1.5m excavation onto the pipe at the back of a resident’s garage. We then laid a new drain in the narrow 1m wide excavation located between the garage and the house. This drain installation was continued through the garden and connected into the new culvert. To complete the work, we had to excavate a tarmac path and patio area, as well as removing a wall and fencing, all of which were reinstated after the works were completed. We also replaced an old damaged wall with a newly built wall for the happy customer.

A second garden further down the street was having similar issues with flooding. However, it became apparent that the run off in this garden wasn’t sufficient. Our solution involved installing two land drains, comprising of perforated piping surrounded with pipe bedding.

We routed the two pierced pipes into a main-line sewer which led out through the garden wall and onto the road. The water was then collected by a nearby gully and led into the new surface water culvert. The customers were pleased to see no standing water in their garden when it rained.

These works were completed in April 2018. They took 4 weeks, meaning they were on time within the client’s programme. Both customers were happy that they were kept updated throughout the process and given detailed explanations of the plans. They were highly satisfied with the standard of the work and the conditions their gardens were left in upon completion.

In July 2018, in much warmer temperatures, we began the spray-lining process for Whitebrook culvert. The old, dry-stone culvert runs from White Brook beck to a nearby river next to Uppermill High-Street.

Accessing the culvert presented issues because of the bends which had been located during previous camera investigations. Therefore to be able to fully survey and line the culvert, we would need to create sufficient access by building two new strategically-placed manholes.

A 3.8m deep manhole was built on the public footpath of Back Lee Street. The second manhole, which was built one street over on Cooperative Street, was 4.3m deep. Prior to excavation, the proposed manhole locations were marked-up using a sonde locator attached to our CCTV camera. This ensured the dig location was exact so that we didn’t miss the culvert during excavation.

Constructing the manholes posed various challenges that as a team, we had to overcome. Most notably, access to the works area was very tight due to the existing structures in the area. This required an experienced machine operator to manoeuvre in the confines when installing the manhole boxes and rings.

By excavating down the sides of the culvert walls and installing pre-cast concrete lintels, we were able to cast the base of the manhole. We raised the manhole rings above the archway of the culvert to ensure the structure was stable and that the weight of the new manhole wouldn’t collapse the culvert.

Creating the new manholes allowed us to split up the culvert into more manageable sections for both surveying and lining.

CCTV works began after the completion of the manholes, to investigate the integrity of the culvert. The survey showed the culvert had multiple radii throughout, which contradicted historical information on the culvert and provided further challenges to overcome.

It was realised that the only way to attain a thorough survey would be to traverse the culvert with a hand-held camera. The reason for this being that the culvert had substantial defects and boulders blocking the route for any crawler cameras to get past.

The detailed information was then reviewed in preparation for the refurbishment works.

Following consultation in-house and with our client we decided the best solution was to spray-line the culvert using Ergilet cementitious mortar’s supplied by Hermes Technologies. These mortar’s would be applied using our Hermes M-coating trailer with lance attachment, sealing the tunnel and improving its structural strength by tying the stones together.

The mortars used included KBi, KS1, SBM and 10SD, which were supplied to us by Hermes.

The spray-lining work itself involved setting our trailer up in various locations along the line of the culvert. These included; Lee Street, GP Car Park, Cooperative Street, Spring Street and Walkers Close. Overall, 327m of dry stone culvert was spray-lined with the cementitious mortar and fully rehabilitated stopping infiltration and improving the culvert’s structural integrity.

Each set up location posed different challenges due to access, road closures, ground types and customers. These were all overcome. The work was completed by the 8th of August 2018, therefore was within the six week programme duration set by the client.

Our clients were highly satisfied with the standard of the work completed during the course of the ten month period we worked in Oldham. 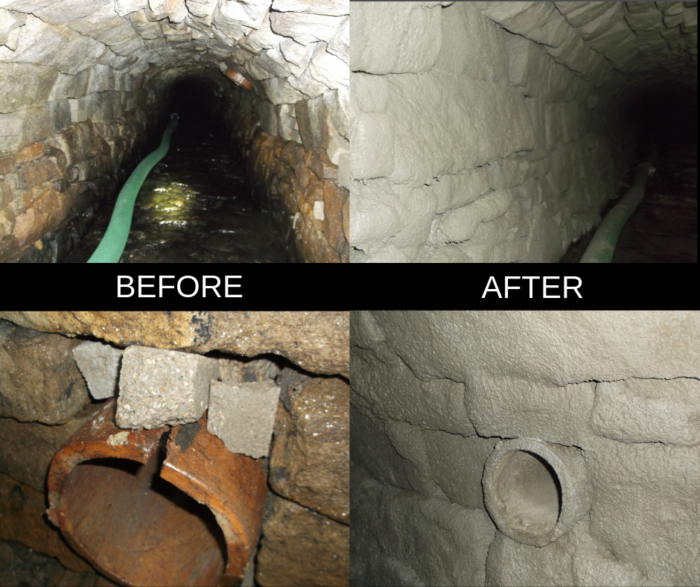 For more information about any of the drainage services we undertook at Uppermill, ring us on 0800 0180123 or use our contact form. 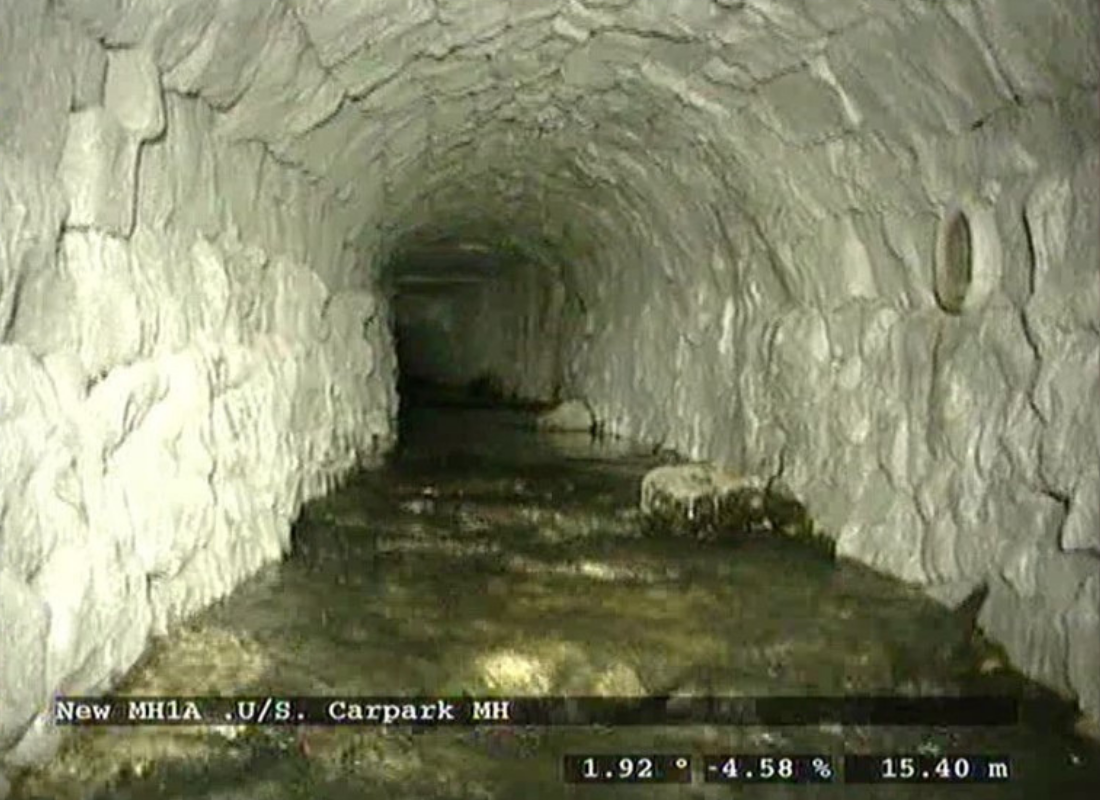