We were called to investigate the combined sewer which runs through the city from the Guild Hall Offices to the rear of Coney Street. A section of the sewer is fixed to the river wall and is often submerged.

The section of sewer contained a large block of concrete which had settled on the silt, forming a 10m long potential blockage which had began to interrupt the flow and was becoming a pollution risk. Due to the location of the sewer and its proximity to the popular city cent, we were keen to provide a quick solution to avoid any pollution risks.

From the outset, DrainsAid were faced with the unpredictable British weather, including the weather conditions many miles upstream in the Yorkshire Dales. If heavy rain was to fall in the Dales, the river level would rise and the sewer would be submerged, including the access point at Guild Hall, making it difficult for us to carry out the work.

“We knew that working within the River Ouse would be a challenge but i was certain our experienced team would find the best solution possible,”- Ben McCluskey, Project Manager at DrainsAid. 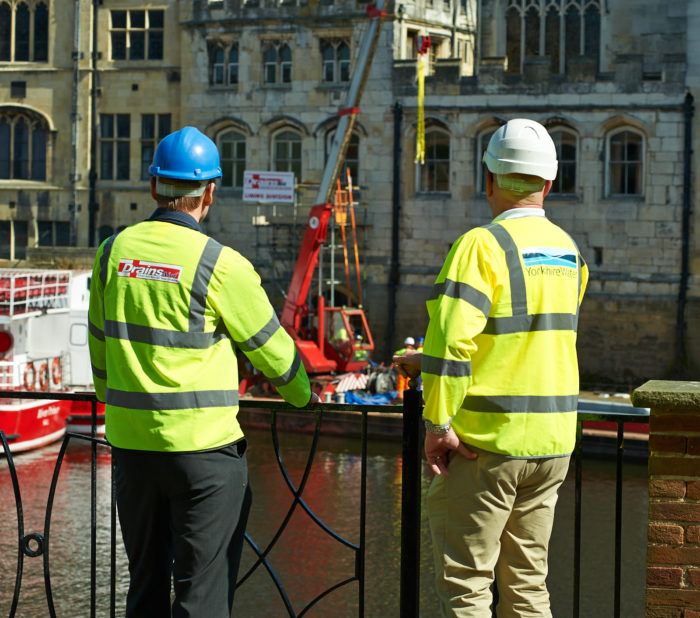 DrainsAid were tasked to find a quick and effective solution to the partially blocked pipe. We used our expertise to formulate the best possible solution. As the pipe was fixed to the river wall and at times, likely to be submerged, it required a different approach to conventional methods.

To ensure the work could be carried out continuously and safely, we utilised a team of divers and a boat fitted with a crane to access the sewer, and were able to cut open the 15mm thick cast-iron pipe. The underwater team used specialist equipment, a hydraulic Power Grit saw, to cut through the pipes in 3m sections, to remove the concrete obstruction.

The work took 5 days to complete and 12m of concrete was removed. Each day the pipe was pieced back together, allowing flows to return overnight. The flow was diverted to another system whilst the work took place.

“Using the divers and boats was fundamental as it meant that if the river levels did rise, we would be able to continue with the works. We needed a permanent and accessible way of working alongside the sewer; the solution to this was a boat with a loading crane, which was capable of lifting the pipe out of the river to remove the concrete,” Ben continued. 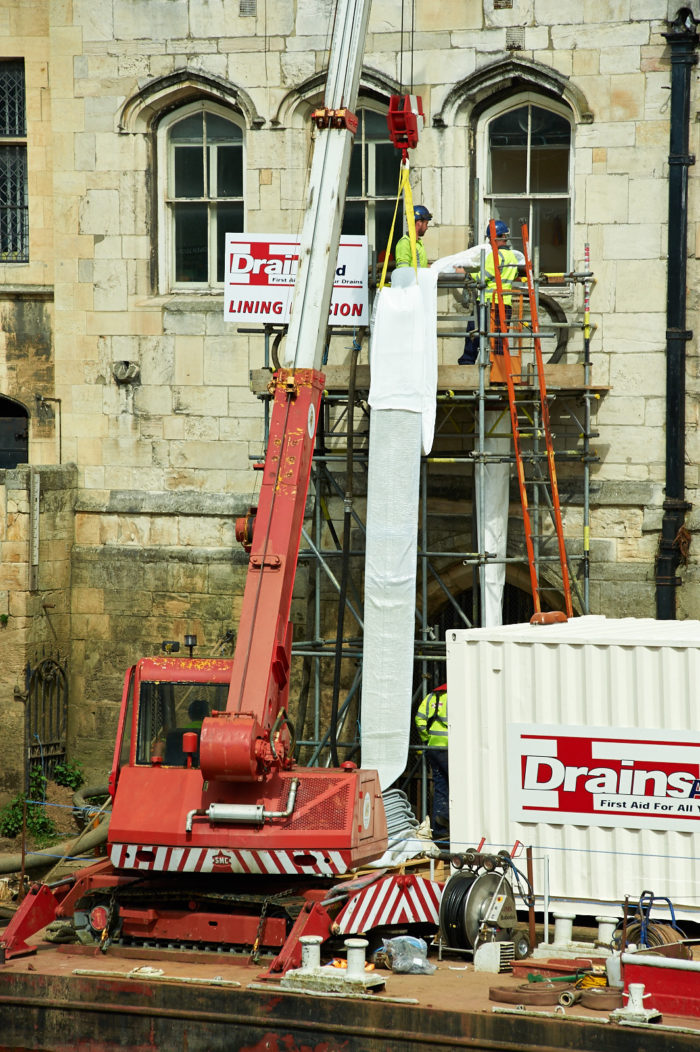 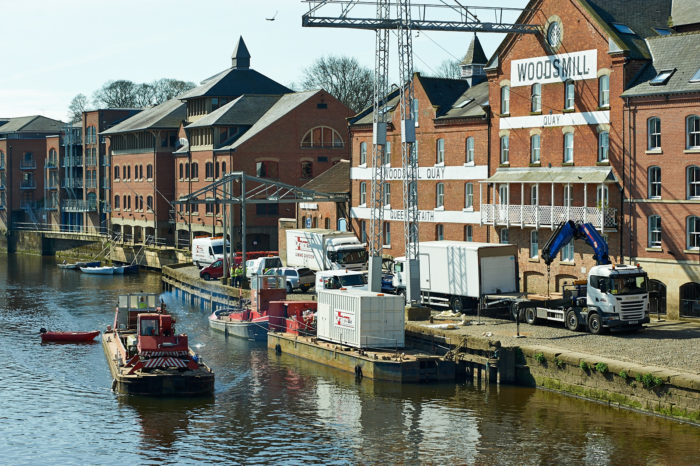 Working on the River Ouse – Lining of the Sewer

To improve the structural integrity of the host pipe, and to stop the ingress of river water into the sewer , we proposed that once the concrete was removed, the pipe should be relined. If the concrete removal wasn’t challenging enough, the only stable working area was a concrete pad at the upstream manhole, which was not large enough to position the equipment required for the lining operation.

Another solution would have been to be found in order to access the upstream manhole and complete the lining works.

DrainsAid utilised a pontoon and tug capable of carrying 40 tonnes to use as a workstation and to house the equipment for the lining installation. Through careful planning, we calculated that the concrete pad was just large enough to support a bespoke scaffolding system and associated supports for inverting the liner.

A boat carrying a crane was positioned alongside the pontoon, and our team was able to life into position and invert the liner from the scaffolding, successfully installing a full-length Hot CIPP Liner and rehabilitating the 200m x 375mm sewer. Whilst the work took place the flows were diverted to a nearby sewer system.

The lining work needed to be carried our when the pipe was exposed, therefore the team had to monitor the weather continuously and wait over two weeks for the perfect weather conditions.

“The process of using boats and barges to load our usual road mounted equipment really made this project a unique one!” explained Ben. “The location of the sewer was a real challenge, but once the different aspects of the project came together and i saw our boiler unit with the liner set off from its loading bay on a boat alongside the picturesque restaurants of York, it was a real sight to be seen.”

Due to the innovation and efficiency of DrainsAid’s work, Yorkshire Water now has a rehabilitated critical sewer free from infiltration issues or blockages, and a reduced risk of polluting the River Ouse.

“Even though we were battling the weather – and the river – the project went extremely well and was completed quickly. As always, the DrainsAid team worked seamlessly in spite of the underwater location and the proximity of the river. The success of the project relied on meticulous planning with different elements all working together,” Ben continued.

This was one of the most exciting project DrainsAid have had the opportunity to work on. If you require any of the drainage repair and maintenance works that we provide, call us now on 0800 0180123 or use or our online contact form. 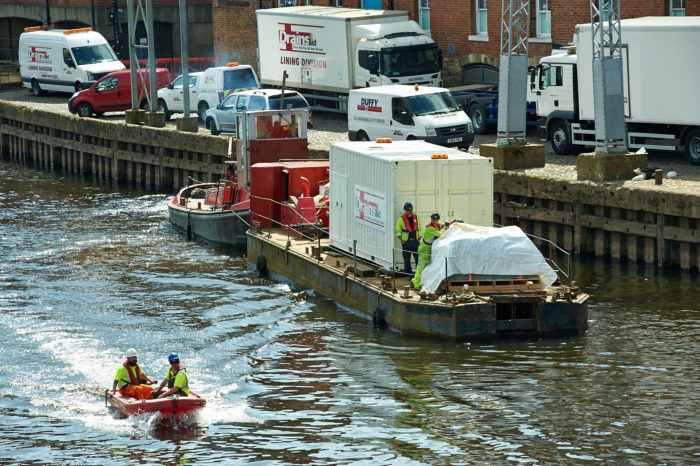 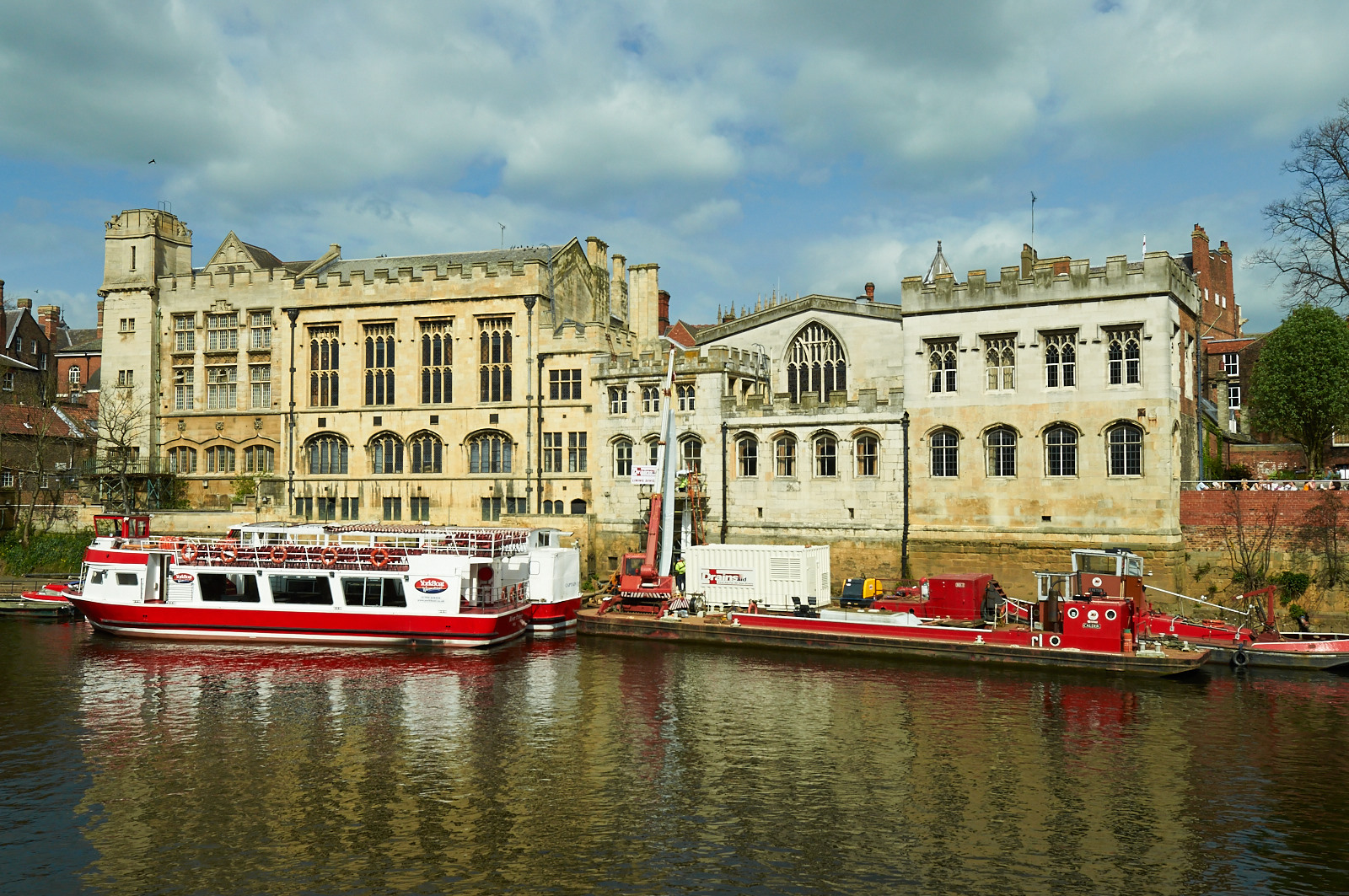