With excellent planning and application, DrainsAid was able to use the Axalta CORROLESS ‘Pipe in Pipe’ lining system in conjunction with the state of the art Schur SR1000 Pipeline Rig, enabling the client, Yorkshire Water, to rehabilitate a deteriorated rising main at Outwood Pumping Station. The repair has extended the pipelines lifespan by 50 years, while the process ensured significantly less disruption was caused to residents, businesses, the environment, and local traffic flows. The technique now offers a new and proven rehabilitation method for rising mains across the UK Wastewater Industry. 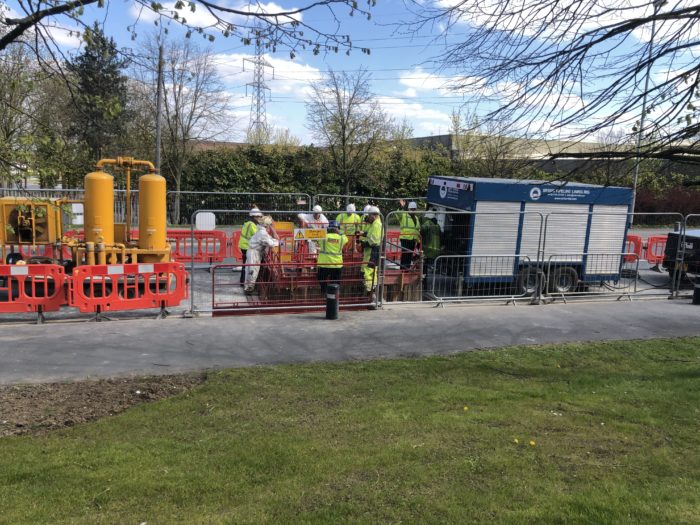 Yorkshire Water partnered with DrainsAid and Schur Ltd to find a solution for the remedial works of some 450m of the 1km long, 250mm diameter sewerage rising main, serving Outwood Pumping Station.

Previously, the 250mm diameter rising main that runs from the SPS Pumping Station on Grandstand Road, to the roundabout on Kenmore Road and on to a discharge point near South Park Way, had burst on several occasions. These previous bursts had triggered area flooding and pollution incidents to a downstream watercourse via the adjacent surface water sewer. 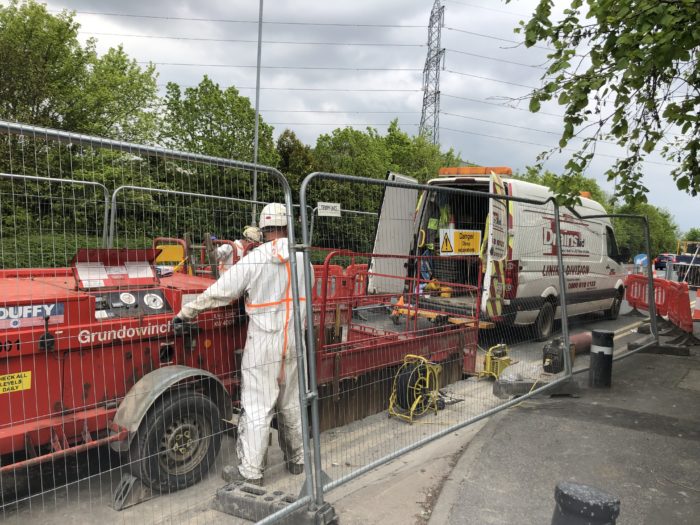 After considering the use of various rehabilitation techniques, including open cut and relay or CIPP lining methods, it was decided spray-lining the existing pipe using Axalta’s carbon-fibre reinforced CORROLESS ‘Pipe in Pipe’, was the best option.

Patented as the CORROLESS ‘Pipe in Pipe’, this new, sprayable lining is applied using a centrifugal process, which is suitable for iron, cement mortar lined, clay, asbestos cement and steel pipes, with diameters between 75mm to 2000mm. 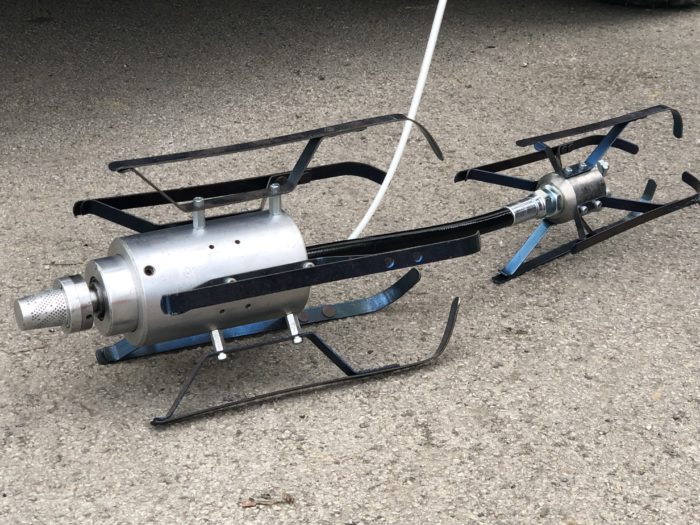 This method was chosen as it would cause significantly less disruption to local residents and businesses in Outwood, unlike an open cut and relay method which would have required large excavations and the associated road closures. CIPP Lining’s longer cure times would have caused extended periods of disruption for residents in the area. Whereas, the chosen process was extremely fast, as the sprayed lining dries under ambient conditions in less than 60 minutes, allowing for numerous coatings within short periods of time. Without the need for steam or hot water to accelerate the process, less equipment was required on site.

Use of the new sprayed liner technology was the most cost-effective method of repair, with our clients, Yorkshire Water, expecting to save around £1.25 million over five years, when using the new spray-lining method as opposed to pipe replacement options.

Unlike CIPP liners, The CORROLESS ‘Pipe in Pipe’ system can accommodate varying diameters. It gives users the ability to add an extremely thin coating to the inner pipe, therefore minimising the loss of the pipe’s internal diameter/capacity. The spray lining process also requires fewer excavations than alternative repair techniques and less preparation time. Not only that, but the robust material is very versatile, allowing the crew to manage any unexpected issues found in the existing pipe immediately from site.

Furthermore, the carbon-fibre properties of the CORROLESS ‘Pipe in Pipe’ system are designed to deliver maximum strength and durability, allowing users to customise the lining base thickness for highly abrasive flows. The Schur Pipeline Rig allows contractors to coat lengths of up to 180m and the attached skids allow the spraying head to manoeuvre around bends of up to 45 degrees. The process also offers a very low carbon footprint when compared to alternative methods, which is a significant benefit in the current market.

The new liner also increases operational efficiency as well as inhibiting corrosion and the formation of tuberculation. The process also offers same-day return to service. 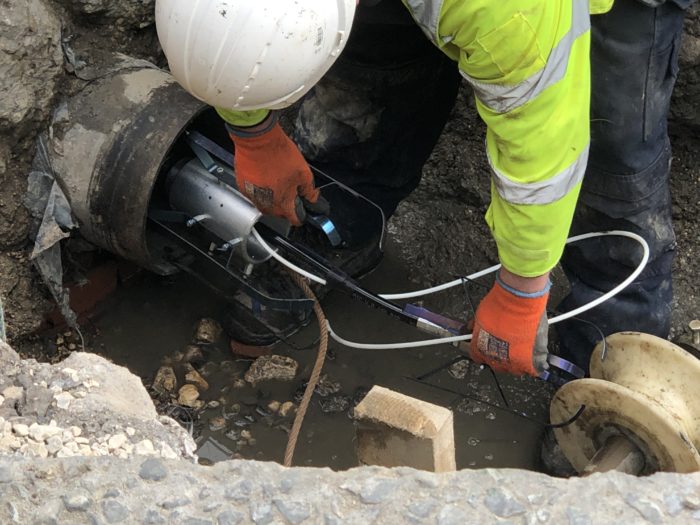 Having prepared the site, traffic management was installed to ensure the operation would cause minimal disruption to the location and general public. However, the traffic management of the site was not straight-forward. At one location, a 4 way Traffic light system had to be operated to manage various busy container depots, a Morrison’s distribution centre and a Coca-Cola site, as well as other business interests. As 350m of the rising main was located on a busy highway, temporary two-way traffic lights were necessary for the full duration of the works.

Once prepared, the 180m length of umbilical cord supplied with the specially modified Schur Ltd SR1000 Pipeline Rig, was deployed via a series of selectively positioned access points, through which the spray-lining of the 450m length of rising main was completed. The plan called for the work to be completed in six individual lining sections using seven small excavations. However, only two excavations were open at any one time.

Pedestrian and road management controls, such as barriers, were set out by NRASWA trained operatives in accordance with the currently approved code of practice. By fencing the perimeter of all work areas and excavations, the contractor ensured pedestrians could not gain access into the site, thereby guaranteeing their safety.

The site crew undertook training to ensure they could safely and successfully use Schur’s advanced SR1000 Pipeline Rig in conjunction with Axalta’s CORROLESS ‘Pipe in Pipe’ system. After completing numerous tests, the DrainsAid team became the first ever company to receive a contractor accreditation from the public health and safety organisation; National Sanitation Foundation (NSF) International, for the spray-lining of wastewater pipes.  NSF International develops public health standards and certification programmes that help protect the world’s food, water, consumer products and environment.

Due to the nature of this sewerage works project, specific hazards such as toxic atmospheres were present on site, which would require consideration prior to the initial procedures. Comprehensive risk assessments and methods statements were collectively produced by the principal designer; Yorkshire Water and DrainsAid as the principal contractor.

When completing a CCTV survey of the rising main, a number of factors had to be considered. Firstly, weather forecasts had to be monitored. Any possibility of rain meant the operation had to be suspended. Pumps also had to be set up at the wet well to support the tankers in dealing with flows.

Emergency procedures were put in place, including rescue arrangements and adequate access for emergency vehicles was left at each site entry point.

Appropriate supervision was provided at all times from DrainsAid’s own Project Managers, as well as team leaders from Schur and Yorkshire Water.

After consideration, we decided to spray each of the six lengths of the original rising main twice, accomplishing a 4mm coating on the inside of the host pipe, to ensure a strong and durable finish. The coating is designed to remain intact even if the original pipe decays. 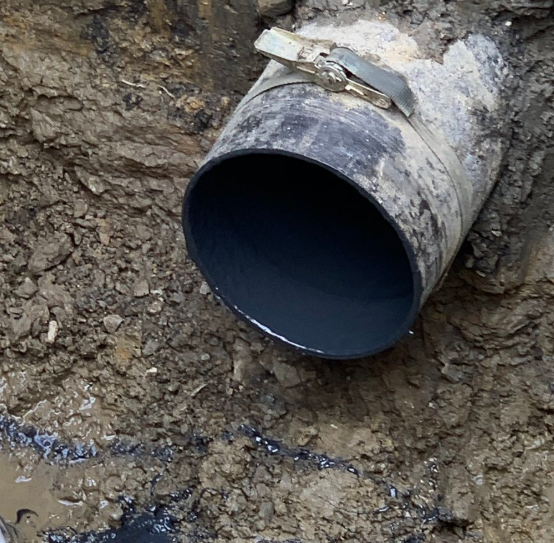 On completion of the works, Yorkshire Water was fully satisfied with all aspects of the spray-lining process, and impressed with the various potential new uses for this technique in the future. The rehabilitation enabled Outwood rising main’s lifespan to be increased by a further 50 years, whilst using a technique which caused minimal disruption and that allows for significant cost savings in the future.

Using Axalta’s CORROLESS Acothane ‘Pipe in Pipe’ in conjunction with the state of the art Schur SR1000 Pipeline Rig, now offers a valid and proven technique for the spray-lining of wastewater rising mains of this type and condition, with the potential for many more applications. Off the back of Outwood project and its successful completion, DrainsAid is delighted to have received further enquiries for future works using this technique, highlighting that the method has already gained significant interest within the water and wastewater industry.