The Task DrainsAid recently used Ultraviolet Cure to rehabilitate a 17-metre section of damaged pipe in a residential area in Sheffield. The pipe was being compromised by a large fracture and suffering from infiltration. The Ultraviolet Cure technique was the

The Task DrainsAid were recently tasked with installing 98 metres of 225mm liner to rehabilitate a pipe in Wetherby. The pipe was not functioning properly due to root infestation. The installation of a new liner also served as a means 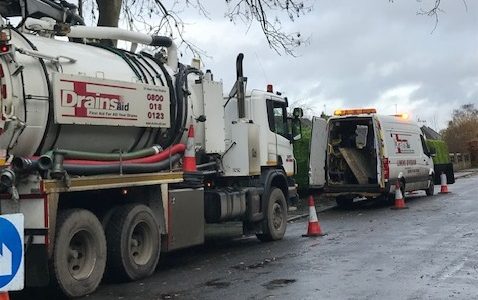 One of our teams recently completed a localised rehabilitation of a 225mm diameter pipe, by installing a 3-metre patch, in a residential area in Harrogate. Patch repair technique was selected due to the localised nature of the damage. This technique

DrainsAid were recently tasked with rehabilitating a freshwater culvert in Sheffield. This project forms part of the flood alleviation scheme in the area, following the excessive rainfall and flooding that has hit South Yorkshire recently. The culverts on this scheme

What was the task? DrainsAid were tasked with altering the invert level of an existing manhole in order to re-route the existing sewer with satisfactory fall, whilst still taking the upstream flow. We were then tasked with forming a new